The first sheep killed for export were slaughtered near Oamaru in 1882, they were loaded on to the sailing ship Dunedin at Port Chalmers – it took three months to process and load the 5,000 carcasses, then a voyage of 80 days to reach London.

Work for the slaughtermen in those days meant a 5am start and finished when the boss decided. One solo slaughterman killed and dressed 238 sheep in one day at Burnside, starting at 7am and finishing around midnight – this was before the days of unionism.

Under this first award, the rates of pay were: two pounds ($4) for slaughtering and dressing 100 sheep and two shillings (20 cents) for a bullock. No overtime was paid, wages were paid every fortnight, and if you were required to work on a statutory holiday you were lucky enough to receive double rates for that day.

By 1912 these departmental unions had formed themselves into district unions and it was decided to form a National Organisation. The New Zealand Freezing Works and Allied Trades Federation was formed by representatives from the following districts: Canterbury, Gisborne, Hawkes Bay, Manawatu, Marlborough, Otago, Southland, South Canterbury and Westfield.

The Union ticket was fifteen shillings ($1.50) per year, with two shillings (20 cents) paid to the National Office; the Canterbury Secretary acted part time for the federation.

Saturday evenings in a pub room were the most likely time for meetings as the rest of the week, except for Sunday, was working time. 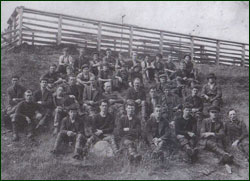 Moves to form a national union of all workers continued through the twenties and onwards. The Depression days of the 1930s almost saw the demise of the union and it survived in just some areas, mainly in the related trades. However, with the election of the first Labour Government in 1935 and the reforming of the Federation of Labour, the Association was back on track and made further advances in conditions in a new national award made in 1938.

Members voted in 1963 in favour of a national union but the Registrar of Industrial Unions refused to grant registration on the grounds that all unions had not voted in favour. A further ballot within the association in 1970 was overwhelming in deciding to form a National Union and, on 1 February 1971, the New Zealand Meat Workers and Related Trades Union (NZMWU) was registered. Only the Auckland Freezing Workers Union and the shed union at Tomoana stayed outside the National Union.

Attempts in the 1990s to form one union resulted in the formation of a new North Island Union. In 1993, the 22nd National Conference in Palmerston North passed a resolution allowing members the freedom to choose between our organisation and the Meat and Related Trades Workers Union of Aotearoa (MUA).

An amicable relationship continued between the two unions and observers from each regularly attended the other’s conferences. In 2002, a more positive dialogue was initiated and this continued and strengthened over the following two years.

Prior to the 2004/05 season, a decision was made to seek the support of MUA members to disband and join the NZMWU as a branch. This ballot took place during that season, and the result was an overwhelming decision in favour of a single union. On 1 October 2005, the new branch was formed and affiliated to the New Zealand Meat Workers and Related Trades Union and the goal of one union covering the country was achieved.

During the infant days of the organisation many sacrifices were made by members to improve wages and conditions, with several long, hard strikes to get conditions to where they are today. More will be required in the future if we are to progress.

* No National organisation of freezing workers due to defeat in 1932-33 strike.

Got an ACC question?
…check out our info here

Need to talk to a union rep?
…find them here

Quick Info About Us